The number of images of the Apollo Belvedere make it an interesting image to use to compare the works of different artists.

Engraving of the interior of the Radcliffe Library about 1840. Casts of the Apollo Belvedere were abundant in public places and schools in the 19th century.

APOLLON PYTHIEN - Drawing by Bourdon Engraved by Quéverdo  Niquet. Offered for sale at the Ebay.com store Lineart, please check out the store 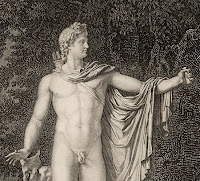 Bryn Mawr College has a copy of Hendrick Goltzius' print of The Apollo Belvedere.

Another print by a different artist, Marcantonio Raimondi, at the Metropolitan Museum.

Albrecht Durer's Apollo was influenced by the Apollo Belvedere.

This is also by Albrecht Durer. The title roughly translates as "On the symmetry of objects and how parts resemble each other when viewed at right angles" 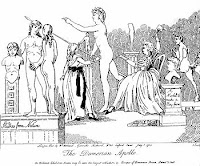 Marjan Sterckx notes in her article about Sculptures by Women in the Nineteenth-century Urban Public Space
that the idea of a woman sculpting a male figure was seen as threatening, and publishes this cartoon of a Damien Apollo to prove it.

William Hogarth includes the Apollo Belvedere in his print The Analysis of Beauty. 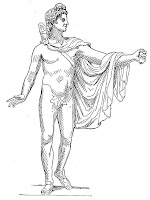 An image with a fig leaf.

Another image with a fig leaf. 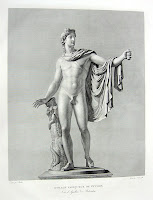 Apollon Vainquer de Python - Drawn by Bouillon, Engraved by Avril Fils. See another post with more pictures from this book: Classical Sculptures from the Musée Francais.

Covers of the December 1832 edition of The Penny Magazine. The first is a photograph of the cover which is for sale on Ebay Click here to see it on Ebay, the second is a scan from Google Books.

THE APOLLO BELVIDERE. The names of few works of art are so familiar to our eyes as those of the Apollo Belvidere and the Venus de Medici; the first one of the innumerable wonders of Rome, the second one of the ornaments of Florence.

The Apollo Was found at Antium, now Anzio, which was the birth-place ot Nero, and one of his favourite places of residence. As in the case of the Laocoon, this statue was for some time supposed to be a work belonging to what we are accustomed to call the best age of Greek sculpture, by which, as we have already explained, we generally understand the period of Phidias and that immediately following it. Indeed the Apollo is now sometimes called the work of Phidias, just as if there were some good reason for giving it that name. And here it may be well to put our readers on their guard against giving credit to the loose assertions of most writers as to matters of antiquity: very few have either time, inclination, or sufficient knowledge to investigate them completely. When then an assertion is made, such as, " that the Apollo Belvidere is the work of Phidias," it is quite fair to ask for the proof; and perhaps this will apply equally well to other assertions about things of more importance than the paternity of a statue.

Some French critics first observed the fact of the Apollo being made of Carrara marble, which Pliny speaks of as being newly worked in his time, under the name of marble of Luna. If this is undisputed, we cannot assign the Apollo. to any other epoch but that of the early Roman emperors, and it seems the most probable hypothesis that it was made for Nero to adorn his sea villa at Antium. This man, whom history has represented to us as a cruel tyrant, an unnatural son, and the murderer of his wife, was still a lover of the arts, and perhaps no mean judge of them, as far as we can discern through that cloud of abuse in which the history of the early emperors is enveloped. The noble figure of'the Apollo, perhaps one of the last efforts of Grecian art to perfect the ideal form of the Archer god, stood at Nero's bidding in all its beauty before the master of the Roman world. And can we doubt that he felt and admired that perfection which never yet was embodied in a living form ? To attempt to express by words the impressions which are produced by the highest productions of nature or art, is a vain attempt: with those who do not feel, it results in mere words that have no definite meaning; with those who do, it can only result in a complete conviction of the inability of words to express the images of thought. No such difficulty would be felt In treating of the Venus de' Medici, a statue which is beautiful, and, for what we know, faultless in execution, but as far removed from the ideal form of the goddess of Love, as the most ordinary female figure that we meet with. 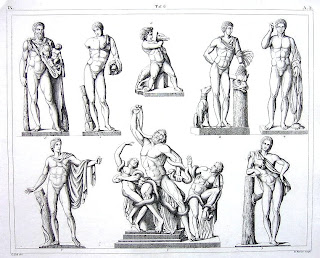 Weird race history chart showing the Apollo at the top of the chain. From the post at Contexts.org.

Another evolutionary drawing from a frog to Apollo by Johann Kaspar Lavater, from the web site Griechische Philosophen über die Evolution der Arten.

Proportions of Apollo from the same site, the page Apollo Belvedere.

Check out my other posts on Physiognomy.

Pope Julius II. Viewing the Newly-found Statue of the Apollo Belvedere
From the painting by Carl Becker. From Romance of Roman Villas, by Elizabeth W. (Elizbeth Williams) Champney.

Goethe in Rome, with images of the Apollo Belvedere.

Classical Art: From Greece to Rome (Oxford History of Art) 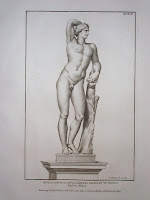 Here's a link to a blog post about a fragment of a statue, posssibly Apollo, that was returned to Greece in 2007. Swiss hand back to Greece stolen statue of Apollo from Crete

This is a post about the Laocoon Group which has a similar number of alternate renderings of the famous sculpture: Engramma - Laocoonte: variazioni sul mito
Una galleria delle fonti testuali e figurative.


The Vatican; The Ideal of Man Among the Ancients; The Meleager, the Apollo Belvedere, the Laocoon, and the Mercury; The Banks of the Tiber - A Traveler's Essay (TRAVEL, HISTORY, LITERATURE, ART, ITALY)

painted a painting of Pope Julius II viewing the newly found Apollo Belvedere, the image appeared as the frontispiece of The Romance of Roman Villas 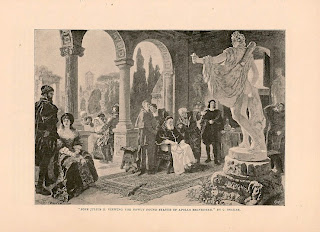 A better image of the painting reproduced in The Cosmopolitan Magazine from 1892. 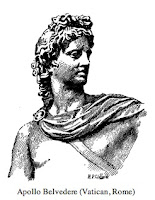 Engraving from the New Gresham Encyclopedia

A print by Marcantonio Raimond

i from the Met Museum. Raphael, Dürer, and Marcantonio Raimondi: Copying and the Italian Renaissance Print 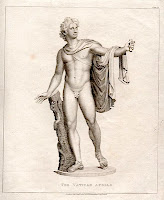 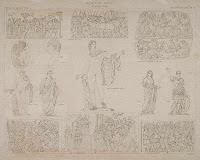 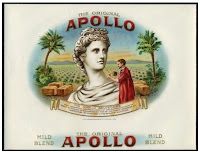 Print of the head of the Apollo Belvedere used as an example of the caucasian race. 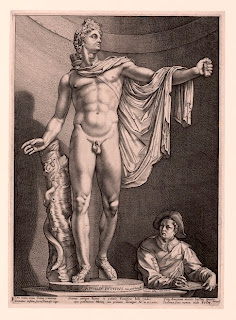 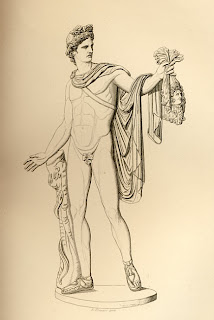 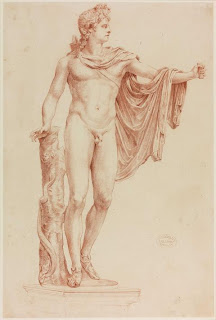 The drawing depicts the statue called Apollo Belvedere (7.3 feet high), a Roman copy of a lost bronze original dated c. 350-325 BC by the Greek sculptor Leochares. The figure represents the Greek god Apollo after his defeat of the serpent Python using a bow and arrow. The figure’s taut muscles indicate that he has just released the arrow. -University College London 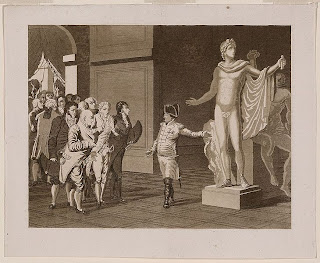 Napoleon and the Apollo Belvedere from the University of North Florida. 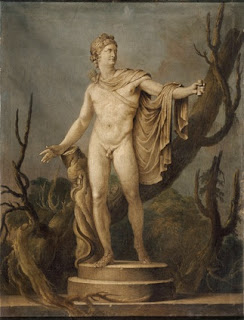 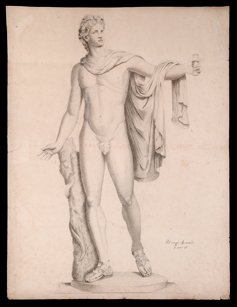 Leonardo Berizzi (first half of the nineteenth century) Apollo of Belvedere (a copy of the press R. Morghen, G. Volpato, 1833) Ink on paper from Istituto di Belle Arti Tadini 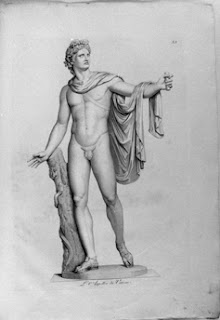 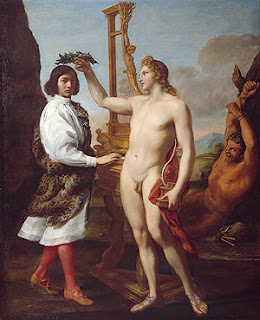 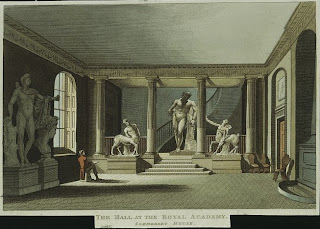 The Hall at the Royal Academy, Somerset House from the Victoria and Albert Museum

Apollo Belvedere in a landscape. 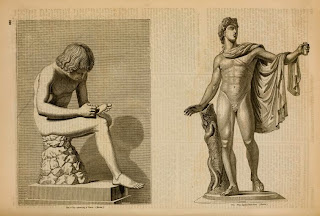 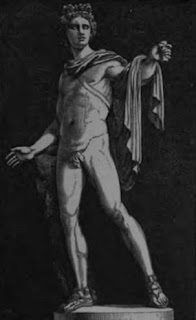 Jan de Bisschop - Two Studies Of The Apollo Belvedere, And One Of The Gaul And His Wife 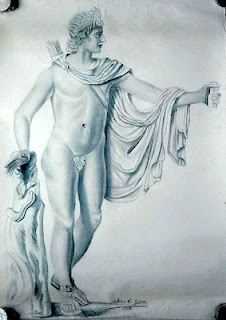 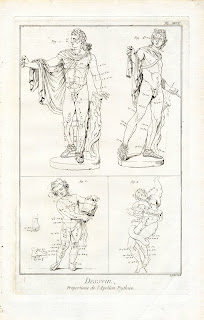 Another example of proportions from the Encyclopedia is in this post. And another on here. 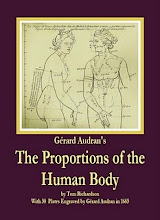